Who’s ready for summer CAAMP! That’s right, white-hot folk band, Caamp, will bring their Lavender Days Tour to KettleHouse Amphitheater for not one, but two shows in Summer 2022… and they’re both on the weekend! The first will take place on Friday, July 22nd followed by the second on Saturday, July 23rd. Both shows will also feature special support from Futurebirds!

Caamp has had what most would consider a meteoric rise. It wasn’t too long ago, just in 2016, when Caamp released their self titled debut album. The LP quickly racked up 50+ million streams with a staggering 25 million streams for their single “Vagabond.”

Formed in Columbus, Ohio, Caamp was originally a duo, comprised of Taylor Meier and Evan Westfall. They brought on a third member and longtime friend, Matt Vinson, to join as their bassist before recording By and By in 2019. The band has amassed over 590 million streams globally as well as achieved multiple #1’s at AAA radio. They have headlined sold out shows and performed at major festivals around the world including Firefly, Shaky Knees, Forecastle, Outside Lands, Austin City Limits, Great Escape and many more. Caamp has appeared on Jimmy Kimmel Live!, CBS This Morning Saturday and The Late Show with Stephen Colbert.

Now, they’re gearing up for the release of their third full length studio album, Lavender Days, which is slated to drop on June 24th via Mom + Pop. Caamp just teased the new album with their latest single “Believe.”

Caamp first wowed fans in Missoula when they opened for Rainbow Kitten Surprise during a sold out show in 2018, then they sold out the Top Hat later that year. In 2019, they returned to Montana for sold out shows at the Rialto and The Wilma. They graduated to a co-headline concert with Trampled by Turtles at KettleHouse Amphitheater in 2021, which… you guessed it… also sold out!

You can take a look back at all those shows by checking out the Caamp photo galleries here. If you check out the photos, you’ll notice that Athens, GA-based indie rock band, Futurebirds, was touring with Caamp when they came in 2019. We’re excited to have Futurebirds at the Amp for the first time in 2022!

On their earthy, jubilant new album, the Columbus, Ohio, band Caamp examines those in-between days that make up a life—not the best or most eventful days, certainly not the worst or most tragic, but those full of small pleasures and forgotten disappointments. Taylor Meier, the group’s singer, and primary songwriter came up with the phrase Lavender Days to describe them—a phrase that struck him out of the blue, “like a coconut out of the sky,” he says with a laugh. Why lavender? “It’s nostalgic. It can remind you of your grandmother’s perfume or maybe the air freshener in your mom’s car. It can summon up all of these incredible memories and transport you to those in-between days, which I think everybody remembers with more clarity than the big events.”

Caamp has been writing and singing about those lavender days—in tender love songs tinged with melancholy and determination—ever since Meier played his first notes with bandmate Evan Westfall more than a decade ago. They met as students at Ohio University in Athens, playing local coffeehouses and growing more committed to this extracurricular project. With the addition of Matt Vinson on bass and Joseph Kavalec on keyboards, they built up a grassroots following well beyond the Buckeye State based on the inventiveness of Meier’s songwriting, the exuberance of their live performances, and their tireless dedication to touring as much as possible. Continue reading… 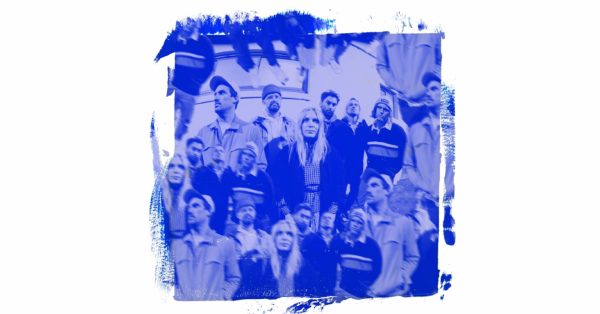 PRESALE: Limited Groove presale tickets will be available online only (while supplies last) from 10am to 10pm, Thursday, March 17, 2022. A password will be provided via email after completing the Logjam Presale sign up form where it says GET TICKETS below. PLEASE NOTE: Logjam Gift Cards cannot be used for presale purchases. Learn how to purchase tickets with your Logjam gift card here.

PUBLIC ON SALE: Tickets for both shows will go on sale to the general public Friday, March 18th at 10am, and will be available at the Top Hat in Missoula, online or by phone at 1 (800) 514-3849. Visit the specific event page below for tickets and more info.