Indie rock mainstay Death Cab for Cutie will bring their Asphalt Meadows Tour to KettleHouse Amphitheater on Saturday, June 10, 2023 with support from Lomelda.

Death Cab for Cutie formed in Bellingham, Washington in 1997. They’ve released 10 studio albums which have helped garner eight Grammy nominations. Their 2005 album Plans received platinum certification and included the hit singles “Soul Meets Body” and “I Will Follow You into the Dark,” which have over 350 million streams on Spotify alone.

The band’s latest studio album, Asphalt Meadows, was released in September 2022. Spin called it their “best album in years” and PopMatters wrote that it “doesn’t merely repeat the melancholy of their work in the early aughts. Instead, it expands and deepens their signature sound without abandoning it.”

Death Cab played an incredible show to a packed house at KettleHouse Amphitheater in 2021 (photos), and we wouldn’t be surprised if this one sells out. Make sure to sign up for the presale and grab your tickets sooner than later!

PRESALE: Limited Groove presale tickets will be available online only (while supplies last) from 10am to 10pm, Thursday, October 20th. A password will be provided via email after completing the Groove Presale sign up form where it says GET TICKETS below. PLEASE NOTE: Logjam Gift Cards cannot be used for presale purchases. Learn how to purchase tickets with your Logjam gift card here.

PUBLIC ON SALE: Tickets go on sale to the general public on Friday, October 21st, 2022 at 10:00 AM at the Top Hat in Missoula, online or by phone at 1 (800) 514-3849. General Admission standing pit tickets, reserved stadium seating tickets, reserved premium stadium seating tickets, and general admission lawn tickets are available. All ages are welcome. Shuttle and parking tickets for this event are also available for advance purchase here.

About Death Cab for Cutie

Death Cab for Cutie originally formed in Bellingham, WA, in 1997 with their casette-only Elsinor Records release, You Can Play These Songs With Chords (later expanded and reissued by Barsuk in 2002). The group, which appropriated its name from a song title by ’60s UK rock ensemble The Bonzo Dog Band, has consistently released outstanding albums over the years, gaining a wider audience and seeping into the consciousness of mainstream America with the success of their latest albums, the most recent of which were released by Atlantic Records.

The band remains a core member of the Barsuk family, however, and we continue to release their albums on vinyl, including the reissues of their first four albums on 180-gram vinyl, as well as 2015’s Kintsugi and 2018’s Thank You For Today. In addition to the Ben Gibbard lo-fi solo project All-Time Quarterback CD reissue from a few years back, and Ben’s more recent Former Lives album, we also released the Chris Walla solo project, Field Manual, and the Steve Fisk & Benjamin Gibbard score to the film Kurt Cobain About A Son. Death Cab For Cutie at the KettleHouse Amphitheater (Photo Gallery) 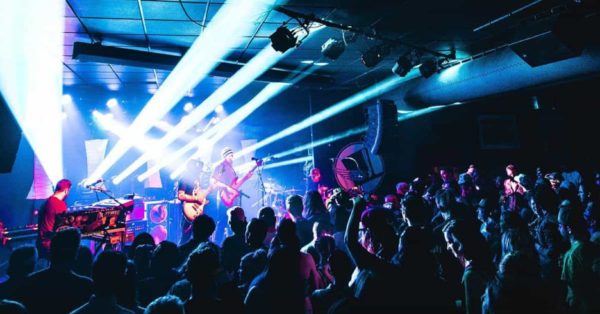